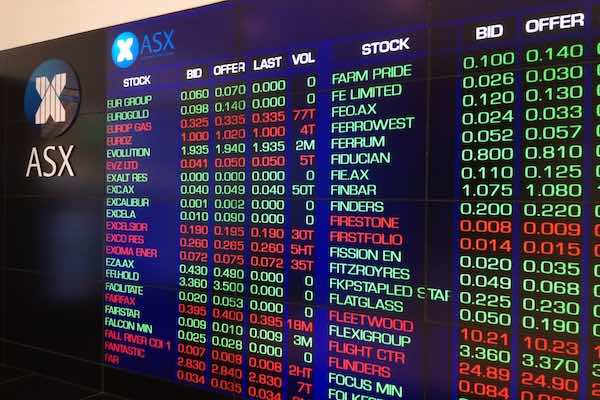 It was a strong session for rate-sensitive technology and payment firms as the local share market started the week sharply higher.

Block Inc and Zip Co led a sizzling buy now, pay later rally, while tech stocks such as Tyro, Novonix and Xero also rode a wave of inflation relief to take the benchmark ASX 200 103.9 points, or 1.5 per cent, higher to 7286.8.

The broader All Ordinaries gained 109.5 points, also 1.5 per cent, to end the day at 7522.6, while the Aussie dollar continued to rise against the Greenback.

It was buying just under 72 US cents at the local close.

BHP was the biggest lifter among the miners on Monday following news both Shanghai and Beijing had eased Covid-19 restrictions.

Lithium stocks and gold miners were also strong, although coal companies were a rare patch of red.

There were also gains for most of the banks, even if they were outdone by healthcare names and retail conglomerates.

Monday’s bounce was the best single session in two weeks and came after the major Wall Street indices closed out their best week of the year so far.

Tech shares were the main beneficiaries of Friday’s rise, with Telsa rising 7.3 per cent, Amazon up 3.7 per cent, Apple 4.1 per cent higher, and Alphabet gaining 4.2 per cent.

IG Markets analyst Hebe Chen said traders have clearly seen a silver lining in recent data that suggests the economy may be more resilient and self-adjustable than the market expected.  However, she said it was too early to say recession concern has dissipated.

“First, none of the data so far is strong enough to convince the Fed to back away from their planned 50 basis-point rate hikes for the next couple of meetings, and don’t forget that they will start culling assets from its $9 trillion balance sheet from June,” Ms Chen said.

If you are interested in our trade mentoring program or the ShareSmart Stock market scanner please email us at support@equitysmart.com.au or call on 07 5609 7665.

© 2020 Share Smart Australia
Disclaimer: Share Smart is a registered business name of GO Markets Securities Pty Limited, ABN 24 653 400 527, CAR 1292963 of Sanlam Private Wealth Pty Ltd, AFSL No. 337927 provides ASX and Chi-X Share Trading services including Listed Investment Companies and Exchanged Traded Funds. It is important that you consider the relevant Share Trading legal documents before you decide whether or not to acquire any of the share trading services. All services and educational content provided are of a general nature only and must not in any way be construed or relied upon as legal, financial or personal financial product advice. No consideration has been given or will be given to your individual objectives, financial situation or needs. Prior to acting on any of the general advice provided to you, you should consider the appropriateness of the advice, having regard to your personal objectives, financial situation and needs. It is important for you to consider these matters and consider the Share Trading legal documents prior to acting on any advice provided to you.