The psychology of trading is one of the most important parts of trading as it can make or break a trader.

The ability to control and adapt can be the difference between a successful trader and an unsuccessful one.

One major part of the psychology of trading is loss aversion.

Loss aversion is when a trader avoids taking a loss once a stock has hit a planned stop loss exit price.

A stop loss level is an area in which a trader will take a small loss to protect themselves from taking a larger one, which basically means the trade has gone against them.

The theory behind loss aversion is that traders avoid the loss, hoping that it might recover and go into profit, unfortunately this generally leads to even bigger losses to the point where they cannot stomach the loss any more.

Below is a chart of BHP (ASX:BHP) which shows an example of a trade that has not gone in the anticipated direction.

The stock originally was viewed as being bullish with market direction and break out enforcing the view, however at one point the stock does hit the stop loss before then changing trend and breaking MUCH lower, eventually to $32.00. 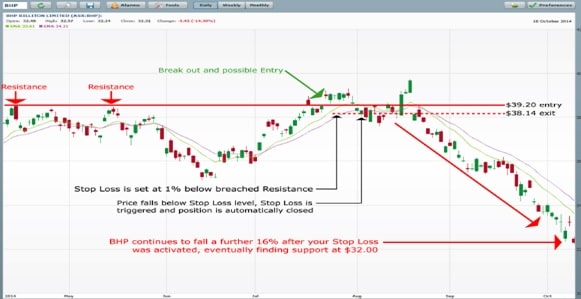 Fortunately capital was preserved and losses minimised on this trade from incorporating the stop loss tool.

Traders who do not use a stop loss often hold these losses for months and sometimes year’s hoping that the price may one day recover.

Instead of having cash tied up in a losing trade, money can be taken and used towards another trade that is likely to be profitable one.

The chart below of Monash IVF Group Limited (ASX:MVF) shows an example of a successful trade where the price has broken resistance and moved up as anticipated until profit was eventually taken.

The ability to cut losses short and let profits run sounds easy in theory, but many traders fail to do so as they struggle with discipline and often fall into the trap of loss aversion.

Understanding the characteristics of winning trades and losing trades can make a world of difference to your portfolio’s performance and can help you deal with avoiding your stop loss.

As an example, go through your winning and losing trades and look for similar traits of what made them losing and winning trades.

This can assist in future trades in identifying that a trade has not done what a typical winning trade would do and can help you deal with taking a loss on the position.

Another way of staying disciplined is to have a trading plan, putting in the notes what your trading plan and goals are which can help keep you accountable.

No, it’s not easy and it does take time and practice. However, it is important to always be mindful of it and working towards the goal of being a successful trader.