In financial news, it’s fairly common to hear the phrase “stock market volatility” as share prices bounce about. But how is that volatility measured and is it possible to see it coming?

A volatile market means prices are prone to rapid changes, in either direction, within a short period of time. In Australia, the S&P/ASX 200 VIX index is used to estimate the level of volatility in the broader market, or how dramatically the benchmark S&P/ASX 200 index is likely to fluctuate in the next 30 days.

The VIX index, also called A-VIX or “the fear index”, was launched on 21 September 2010 and provides prices dating back to January 2008.

The A-VIX tracks ASX 200 option prices. An option is a contract between two parties that gives the buyer of the option the right, but not the obligation, to buy or sell securities, such as shares, at a pre-determined price within a specific timeframe.

When pricing their options, investors take into account the anticipated level of risk in the market to gauge how the price of securities might move.

Through certain equations that include option prices, the A-VIX essentially quantifies the level of investor confidence and tries to outline an overall picture of market sentiment.

What the A-VIX reading means

Just like the ASX 200, the A-VIX provides real time prices. According to the Australian Securities Exchange, there are four categories of investor sentiment based on the reading of the A-VIX, as below:

For example, when China devalued its yuan currency last month, share markets across the world tumbled. Uncertainty around China’s economic outlook, coupled with lower oil prices and a myriad of other factors, saw global markets experience huge price swings in the weeks that followed.

Within two weeks, the A-VIX jumped to 31.2 on 25 August, the highest close so far this year, from 17.4 on 10 August, the day before the Chinese government announced the first of a series of devaluations.

A reading above 30 signalled that investors were extremely uncertain about what that surprise move by the Chinese authorities and much lower oil prices would mean for global markets down the road. Conversely, the ASX 200 sank 6.8% over that two-week period.

For comparison, investors were most positive this year on 20 March, as the A-VIX closed at 12.4.

Correlation between the ASX 200 and the A-VIX

The chart below shows the correlation between the ASX 200 and the A-VIX over the two months to 9 September 2015. 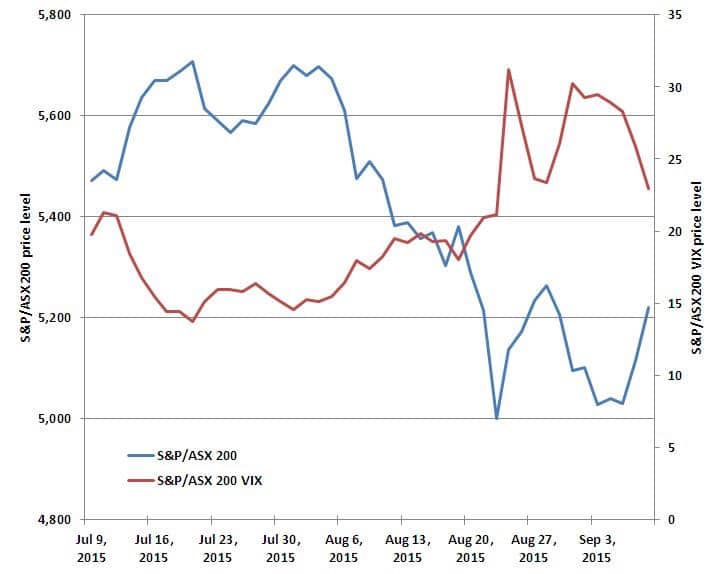 Note that when the levels of the A-VIX were relatively lower in July—investors were cautious rather than negative about the market’s prospects—the ASX 200 traded at relatively higher levels.

As the volatility index surged in the final week of August, the ASX 200 tumbled.