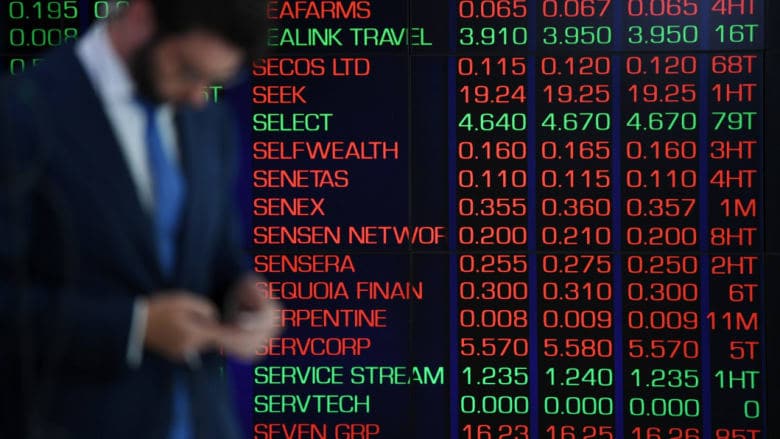 The ASX ended its second worst day of the year with around $40 billion wiped from Australian markets after a “perfect storm” on Wall Street caused heavy stock losses across every other sector.

US-China situation trade tensions have escalated in the past week, with China, on Friday, reducing its reserve requirement ratio, or the amount of cash that banks have to hold in reserve, a move that seemed in retaliation to the US, Mr Twidale said.

The other main contributing factors weighing on the market were the IMF’s cut to growth forecasts yesterday and continuing strength in US bond yields.

Whatever the tipping point, overnight they all seemed to come together in an almost “perfect storm”, he said.

Mr Twidale expects the Australian markets will fall lower over the next few days, and warned of lingering wariness in the market as traders fear a further deterioration in US-China trade relations.
He expects the Aussie dollar to slide below 70 US cents soon, despite battling against the tide today to buy 70.74 US cents at the close, up from 70.13 at the same time on Wednesday.

Energy and healthcare have also taken a beating, falling 3.75 and 3.46 respectively while the heavyweight financial and materials sectors too were in the doldrums.

Telco giant Telstra fell 3.12 per cent after it apologised to shareholders for a lack of clarity about how it calculates executive bonuses, acknowledging that some investors still feel they are too high despite a 30 per cent cut.

Only gold miners and Fortescue Metals Group are offering any real relief as investors seek a safe haven, recovering from yesterday’s flat trade to push shares in Evolution up more than six per cent and St Barbara up the same amount.

Fortescue Metals Group has launched a share buyback program of up to $A500 million ($US355 million), joining bigger rival Rio Tinto in handing back cash to shareholders.

The big four banks were down between 3.24 and 2.56 per cent, with ANZ leading the quartet lower despite the heads of Commonwealth Bank and Westpac receiving a grilling at a parliamentary hearing in Canberra.